Select Your Injury Type
(check all that apply)

Civil Courts in Baytown — Harris County, Texas
in which a Personal Injury Lawyer would file a lawsuit

If you live in Baytown and want to file a lawsuit, your Baytown Personal Injury Attorney will know in which of these courts your case should be filed.

If there was a Wrongful Death and Survivorship lawsuit and there was an Estate proceeding established in the Harris County Probate Courts, then a Houston wrongful death lawyer could file it in:

If you are seeking an appeal from a civil case, it will be filed in one of these appellate courts:

Harris County is under the jurisdiction of both the 1st and 14th Courts of Appeal and the selection is random for which Appellate Court will handle the personal injury lawyer's appellate issue.

Finally, if you wish to appeal a civil decision from the appellate courts you will file it in:

The Supreme Court of Texas

If your civil suit involves a person who lives out-of-state, or if there is diversity or a “federal question,” then a personal injury lawsuit can be filed in: 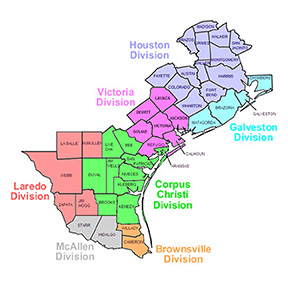 If you wished to appeal from one of the trial courts in the United States District Court for the Southern District of Texas - Houston Division, you would appeal to the Fifth Circuit United States Court of Appeals located in New Orleans, Louisiana.

The Judges in the Fifth Circuit are:

If you wished to appeal from the 5th Circuit, you would file a Writ of Certiorari with:

Contact information for the Supreme Court of the United States and its Justices:

Baytown Wrongful Death Lawyers are experienced trial lawyers and can represent you in federal and state courts throughout the Greater Baytown area. Contact a Baytown Personal Injury Lawyer today for a FREE INITIAL CONSULTATION.